A couple travelling on a budget & getting lost

Another one day trip, also done on the long August weekend, day before the sunflowers in Kent. As the bank weekend holiday loomed ever closer, a chance to book a cheap flight somewhere or a low budget place to stay in the UK flew out of the window. I was even looking at camping sites, but all required a minimum 2 somewhere even 3 night stay. Quite a few of them were family ones and not biker friendly which narrowed the pool even further. We gave up on staying the night anywhere where a night in a tent cost more than a room. Thus came the idea of little day trips to places close to home. Seven Sisters cliffs was one of those; 2 hours one way was easily doable on The Beast and we thought of having a bit to eat at Hastings as well. 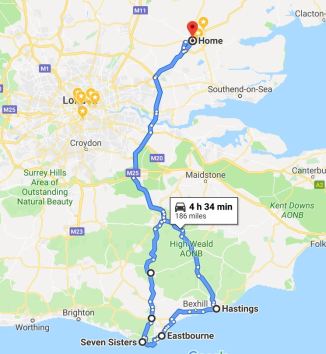 We had a leisurely morning before getting on the bike. ETA was 2h 08mins. By the time we got to our destination, we have been on the road almost 3 hours. The traffic was not that bad and we filtered any queue we found but the gps must have redirected us a couple of times. When we got there, parking lots were full but this is the joy of a motorcycle, we can park in small nooks and cranies so there is always space, even in full lots. It seemed quite busy but the beach was not too crowded; there was plenty of space, both on land and in the sea. The sun was relentless and after 10 mins I had to go to the water to cool down. Now, a thing to mention here – I am a Croat and when it comes to beaches and the sea, I am a bit of the snob as I got spoiled with our clear waters and amazing beaches you can find all along the coast. People keep asking me if we go swimming in the sea in England and every time I tell them I would not put my big toe in the water here, it looks so horrible (closest sea to us atm is Southend on Sea and Clacton so you can understand my answer).

However, the sea here looked clear and clean and when I got in it was so refreshingly cool. I did not have a bikini so I got in as far as my shorts allowed, but I tell you now, I would gladly go swimming here. The white limestone of the cliffs combined with the beautiful blue of the sea almost seemed like you were somewhere on the Mediterranean. And it is a pebbled beach! Don’t worry, all the pebbles are rounded and soft to walk on. They are also very peculiar, white and grey from the outside (kinda look like small fat cows), but when they break, inside looks a bit like obsidian or some other dark stone used for jewellery. The only other place I can think of in the UK where the water and beach looked inviting was when we were in Whitley Bay last year.

When we had enough of sun and heat, we had a cold drink up top and went for a walk up the hills. This is where my sandals broke so the walk was really short (I had trainers for riding in the givi). But, no matter how short our walk was, it was enough to get annoyed with inconsiderate tourists. You want to take a photo from one spot, you set yourself up and all you need to do is hit the shutter button but nooooo!, here they are, right in front of your camera. So you wait, thinking they’ll move soon, I’ll take my shot and we’ll go. Well that would be too simple; they took ages. Several different poses then they swap, there was no point in standing there. There were these 3 girls that already “kicked me off” one spot – I waited almost 10 mins patiently for them to finish but they were not having it so we moved. After about another 10 mins I was just taking one of the last shots, everything was in frame, finger on the button and here they were again, sitting down and posing! When we travel I try and not walk into people’s shots and I try not to hang about too long on one spot; we are all travellers and want nice photos and have other places to see. A little mindfulness goes a long way. It doesn’t take much to be pushed of a cliff -.-

Riding gear back on and we were on the road again. The way to Hastings was empty and the ride was quite nice; apart from going through Eastbourne, we were surrounded my fields, seaside and nature. Hasting is a little town and can be a nice day out with the castle and the funicular, the cute little streets and the beach front. We spent only a few hours there, having fish and chips and just enjoying the sun and the weekend. It reminded me a little bit of Morecambe and Douglas. Coastal towns in UK all have a similar “design”, tall houses made in the same way, a promenade right next to a sandy beach and, of course, a pier with some stalls and maybe an arcade. I believe when we were down by Romney Sands in Kent it looked very similar as well but that was 3 years ago and I don’t remember it correctly. 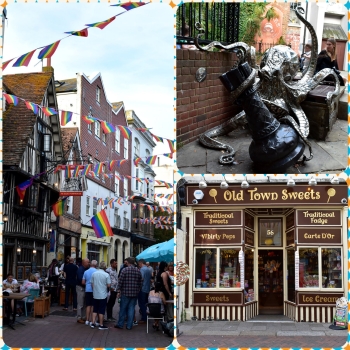 Anywho, we did not have time to go castle exploring nor the time to ride the funicular. We left Hastings after raiding a sweet shop we found on one of the colourfull streets full of pubs. We managed to avoid most of the traffic back to Essex as well. By the time we got home, we were dead tired. We definitely should have left earlier and also stuck to only one place. That way it would have been more manageable and a bit less running around. We also would have seen the chosen place properly. If you are planning something similar, either don’t pile things to do or go for two days. And don’t forget to bring a picnic!! I think a picnic on the beach or on the fields surrounding the cliffs would have been amazing!

This site uses Akismet to reduce spam. Learn how your comment data is processed.